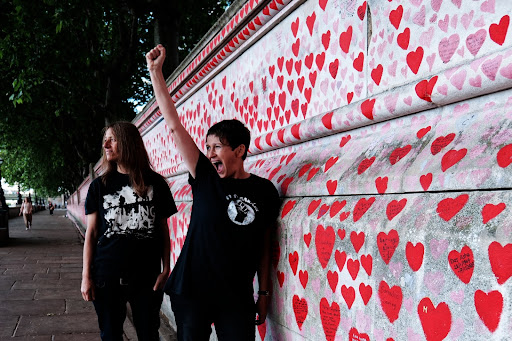 A rampant cut of political rock’n’roll unafraid to take a stand, “Know The Score” sounds a rallying cry for action against the increase in violent behaviour towards women in recent times.

According to Counting Dead Women (headed-up by Karen Ingala Smith, CEO of nia, a London-based domestic and sexual violence charity working to end violence against women and girls), since Janaury at least 53 UK women have been killed in cases where a man is the principal suspect. Seeking to address this disturbing statistic and the desperate need for change, Deux Furieuses say of their affirmatory new single:

“We wrote this song about the shadow pandemic of violence against women. The song is a pounding strut of confidence on a big stage. It is bravado on a deserted street as we reach for our personal alarm… This is a song in solidarity with women who all know the score.” Coursing with cutting lyrical references to some of the most distressing cases of recent times, lyrics like “Another vigil on the streets of our cities tonight” holds a candle to the likes of Sarah Everard and Zara Aleena; whereas the biting couplet “abuse of power comes as no surprise, say the words on the T-shirt of a woman whose hands are tied” takes a fierce swipe at the Government’s draconian attempts to limit our human rights to protest. “The Government is ripping up the Human Rights Act to limit how we challenge injustice. Know the score – we are losing rights” the band add.

“Know The Score” is a strident example of what to expect from ‘Songs From Planet Earth‘; Deux Furieuses’ third full length album and second with Xtra Mile Recordings. Written over the course of the last two turbulent years, ‘Songs From Planet Earth’ touches on the maelstrom of socio-politcal issues that continue to dominate the UK, from widespread inequality to the ongoing outcomes of the pandemic to gender politics; while taking unflinching aim at a government completely incompetent to deal with them.

Recorded in October 2021 as part of a two-week residential album session at Grange Farm Studio, the album was self-produced by the band for the first time. Assistant production was added by Isi Clarke who also recorded the album with mix/post production by Mark Freegard (The Breeders). A special guest appearance comes from Deb Googe (My Bloody Valentine), who plays bass on previous single “Bring Down The Government”; a track which when released in June 2022 was met with the immediate resignation of Boris Johnson.  A band on a mission and unafraid to make a bold statement, of the themes at the heart of the new album they say:

“‘Songs From Planet Earth’ is a beating heart signal out from this world as we fall spinning into a vortex of pandemic, isolation, avoidable deaths, political corruption, personal mourning and ultimately survival. The album documents the journey from the city to the countryside like refugees in search of sanctuary.”Deux Furieuses are Scottish vocalist and guitarist Ros Cairney and Greek/London-based drummer Vas Antoniadou. Formed in London in 2013 with a mission to shine a light on the sickening inequalities they saw in the world around them, the duo went on to release their debut album ‘Tracks of Wire’ in 2016 which drew acclaim from the likes of Louder Than War, Q Magazine,Radio X’s John Kennedy and Frank Turner. Signing to Xtra Mile Recordings in 2019, they released their Rob Ellis (PJ Harvey) produced second album ‘My War Is Your War’, with the label also on board to release its long anticipated follow-up this Winter.

Recently completing a tour across the UK as part of Brix Smith’s current live band (with Ros and Vas playing guitar and drums respectively) in support of PiL; the duo are now preparing to take the songs of ‘Songs From Planet Earth’ to the masses. Plotting a slew of shows as Deux Furieuses, the band will be supporting War On Women (throughout August), Skinny Lister (this November), plus will be making notable festival appearances at the likes of Kendal Calling and Loud Women Festival. The band also launch “Know The Score” with a single launch gig at John Kennedy’s ‘The Remedy’ Club night TONIGHT (21 July). Full dates and details can be found below: